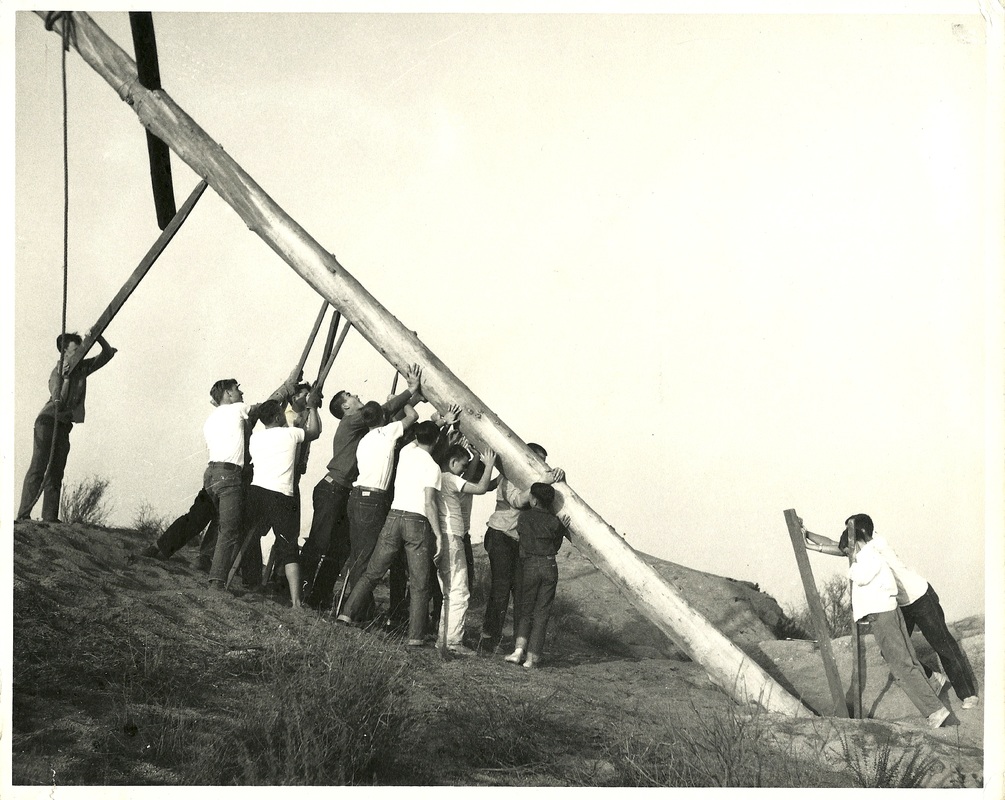 Our Cross and Our Crown

A blazing California sun gazed through an azure sky down on Marygrove below. Here on the summit of a hill behind the Divine Word Seminary, forty-seven seminarians lowered their heavy burden - the vertical beam of a thirty-two foot cross. The date was October 31st.
TWO weeks previous, the idea for a new and enormous cross to be situated atop one of the hills, behind the seminary had germina­ted in the mind of Fr. Caffrey, our Assistant Prefect. The plans were talked over among the stu­dents. All agreed the cross would be a good idea, but many were skeptical of its practical­ity - I was one of them. How to convey the trunk of a newly chopped eucalyptus tree to the top of a 1400 ft. rise in the earth did present a problem. A number of proposals for the movement of the log were offered. Perhaps we could put it on rollers and pull it up the mile long winding road ascending the side of our objec­tive. Maybe we could use the old pick-up truck as a means of conveyance.  Of course, there were as many ideas offered as stu­dents willing to help so the dec­ision was made - the method of transportation would be the STUDENTS themselves. So with boards attached perpendicular to the beam, the column of students and wood slowly began to move up the winding road.
At first the burden seemed light. The loud refrains of "Ninety eight bottles of beer on the wall," began to fade as time, distance and the real weight of the wood made its impression on us, especially a physical impression. Yet with hands blistering, we slowly advanced. About a quarter way up the hill, Father Caffrey, with the unanimous consent of the cross bearers, called a rest. The beam was lowered to the ground along with the collapsing semi­narians. Tired as we all were, not one of us was willing to turn back. Our objective was the summit of the hill and our burden was the cross. After a few minutes the procession was again wending its way along the road.  Higher, still higher, the rest periods becoming more fre­quent, but slowly and patiently climbing. At last it was reached, the top of the hill. Backs bent and muscles taut, we left our future cross lying in the dust. In a joy sprung from a sense of true achievement, we returned to the seminary, heads high and voi­ces ringing with happiness.
A week later the horizontal beam, part of a small telephone pole was affixed to the vertical. The cross was raised by means of ropes and man power. Slowly and painstakingly the cross was raised higher and higher, then, thump into the four foot pre­pared hole. The shouts of joy echoed throughout the hills. Our Cross and our Crown of achie­vement.
A blazing California sun now gazes through an azure sky down on Marygrove below. High on a hill behind Divine Word Seminary there now stands a thirty two foot Cross - a tribute to the seminarians below and their offering to Christ above.