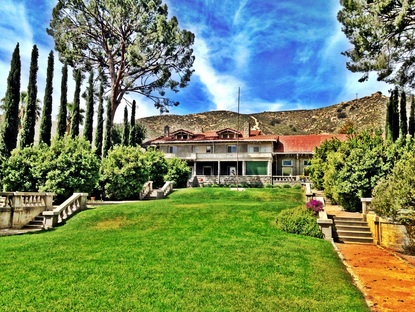 Hole Mansion Present Day 2014
The Stone House, historically known as Hole Mansion in recognition of its first owner, is the center of the property of the Divine Word Seminary, a place for religious retreats and housing of the returned and current foreign missionaries of the Divine Word Catholic Order.
The land on which the house sits was part of an 1846 land grant made by Pio Pico, the last Mexican governor of California to the United States.  The land grant, totaling 20,000 acres, was dubbed Rancho La Sierra Sepulveda,  and included some of the most fertile agricultural land in Riverside County.
In 1857, Senor Sepulveda sold the rancho to a famous American rancher and land speculator , Abel Stearns, for $2,600.  Stearns died in 1872 and in 1887 ownership of his estate - includingthe Rancho La Sierra Sepulveda - transferred to a syndicate, the Stearns Rancho Co.
In 1909, Willits J. Hole, a sales representative for the Stearns Rancho Co., purchased Rancho La Sierra Sepulveda in almost its entirety.  He sold much of the rancho's land, including property that would later become a major portion of the city of Norco.
In 1922, the Seventh Day Adventist Church bought from Hole the 375-acre site, which is now known as La Sierra University. Hole raised fruit, vegetables, alfalfa, sheep and cattle on the the portion of the rancho that he did not sell.  The site of his house was chosen not only for its view, but also, because it is blessed with year-round wind currents.
The Hole Mansion was designed by Arthur Benton, architect of the oldest remaining portions of the Mission Inn, and cost $15,000 to build.  The walls and foundation are built of locally quarried granite, 18 inches thick.  The house's grounds were designed by a well-known landscape architect, Paul J. Howard of Los Angeles.  The formal garden at the front yard measures some 200-feet by 200-feet and is terraced to three levels.  The garden features four six-feet by 12-feet lily ponds.
Willits J. Hole died in 1936.  Through subsequent ownerships, the old rancho was further subdivided.  In 1956, the Hole Mansion, with sufficient land -60 acres- to retain its isolation, was sold to its current owners, the Divine Word Seminary.
The Hole Mansion was designated in 1980 as a city landmark (No. 44) by the Riverside Cultural Heritage Board. 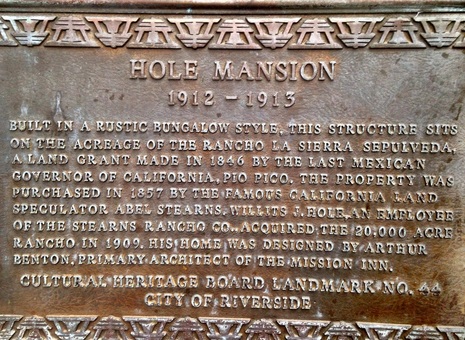 ﻿THE PLAQUE READS:
Built in a rustic bungalow style, this structure sits on the acreage of the Rancho La Sierra Sepulveda, a land grant made in 1846 by the last Mexican Governor of California, Pio Pico.  The property was purchased in 1857 by the famous California Land Speculator Abel Stearns.  Willits J. Hole, an employee of the Stearns Rancho Co. acquired the 20,000 acre rancho in 1909.  His home was designed by Arthur Benton, Primary Architect of the Mission Inn.﻿
Cultural Heritage Board Landmark No. 44
City of Riverside
Press-Enterprise News Article :
BACK IN THE DAY: Hole Mansion, A Riverside Landmark
By Kim Jarrell Johnson